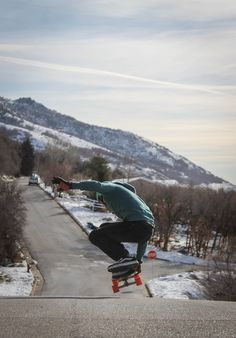 As you may have noticed we’re a couple of people that are blogging about do’s and don’ts today.

Well mine is about Longboarding….. during the winter…… in Sweden Don’t think its impossible. when the roads clear just a bit, just go out and wake that board up from hibernation. Don’t think that you should train on your sliding technique on ice patch, Trust me it’s way more fun to be alive than dead.

Always where the lid. I would have been dead by now if it wasn’t for that flowerpot on my head, and that was a summers day.

When Gino asks you to do 10 points of Do’s and Don’ts. Don’t because it’s really hard to come up with 10 things not to do whilst longboarding or even one single argument why not skateboarding at all.

Don’t over do it, hypothermia is a real thing and if you start to sweat and have a long way back home it can get really nasty quick… (This is obviously just to fill out the text, nobody has ever gotten hypothermia whilst skateboarding ever)

Here in Sweden we have a nature that you kinda have to stop and look at, don’t just push by.

Don’t forget to take care of your equipment. The ice and snow turns into water and that will dammage the bearings, give your board some TLC.

Don’t loose focus, ice and snow aren’t always visible and if you have wheels with a low contact surface it can get scary quickly. But that’s what’s fun right, so maybe loose your concentrations now and then. Don’t not do it. We are so limited by our fears and what other people think. If the roads close to you are covered with a couple of cm of snow, well then you have a real challenge. If you have clear roads GO SKATE FFS. yeah it’s harder and it’s tougher and the roads are not in perfect conditions but hey it’s an adventure and it’s good training for the spring, summer and autumn season.

Don’t be a dick about it, Don’t read a do’s and dont’s section and expect it to be to serious. Just go out and have fun (after reading the really serious Do’s section and the other 10 Do’s & Don’ts on Mens World)

So there you have the negative part.. Heres the great stuff

make sure you are dressed for the occasion. A heavy winter jacket is great if you go kinda slow and are just crossing for a while. And don’t forget gloves and a hat. Dont forget that the only thing that is in your way is your will. When you feel that you have given it your absolute best and your body can’t take it anymore then you’ve just given 40% of what you have.. Not even Half

Be like Andrew Andras. The 27:th of February 2016 (yesterday) he did the remarkable and skated for 24h straight. How far did he get? 309 miles or 487km during the 24h Ultraskate 2016 breaking his own world record.. So be like Andrew Andras Do it because it so much fun and to break unwritten rules. Don’t you just hate when people say ”you can’t do that” Especially people that never tried them selfs.

Your getting great and fun Exercise. Just Do It

There are not much to think about, what more do you need? Dress for the weather, It’s fucking minus degrees outside, stay focused and go skate.

Because you can be the one starting a new trend. That and Long-distance kicksled riding (In Sweden we call it a kick) Well Really a ninth argument why this is the best thing ever. Awesomeness, Be Like Andrew, New Trends, Breaking rules, overpower your mind, you get to dress upp and It’s fucking Awesome

Well It’s fucking Fun.. I know this list was supposed to be what to do and not to do with 20 different arguments but there is simply 2. ”No, Try not! DO or DO NOT! There is no Try!”